Here’s a food guide of all the local Neapolitan dishes to try! During my time in Naples, I had the chance to meet some great locals (who I’m proud to now call my friends), recommend all the best places around town to try their local dishes!

Hope you get to enjoy them as much as I did!

Top 7 Neapolitan local dishes you must eat while visiting Napoli (Naples), Italy and the best places to find them: If you’re going to try one local dish from Naples then pizza is it! Naples is the birthplace of pizza and home of the world’s best. The famous Neapolitan Margherita pizza is prepared with fresh and simple ingredients that include: thin crusted dough, topped with fresh ingredients of green basil, raw tomatoes and extra-virgin olive oil, perfectly cooked in high temperatures in a wooden oven (to learn more about the history of pizza, click here).

Where to find the best pizza:
• L’Antica Pizzeria da Michele – This pizzeria is renowned to have the best pizza in the world and is where they filmed the adaptation of Elizabeth Gilbert’s novel “Eat, Pray, Love” starring Julia Roberts.
Address: Via Cesare Sersale, 1, 80139 Napoli NA, Italy
Tip: Check times of operation and make sure to go extra early to avoid the massive line-up and wait times (especially since this is a hotspot for tourists as the movie was filmed here!).

• Pizzeria Sorbillo – Pizzeria Sorbillo was located just down the street from my volunteer house in Naples, therefore was one of the most visited restaurants I dined at and one of the local favourites as well! Gino Sorbillo belongs to one of the oldest families of pizza makers in Naples and was a pizza Masterchef for three editions and his restaurant has been featured by Discovery and National Geographic all over the world.
Address: Via dei Tribunali, 32, 80138 Napoli NA, Italy
Tip: This place doesn’t take reservations, so it’s best to go early as it gets quite busy! They’ll give you a ticket with a line number (there’s no seating for the wait, so expect to stand for a while!).

• Pizzeria Di Matteo – Di Matteo pizzeria, is a two-levelled restaurant with only one location in the heart of Via Tribunali, just a few steps from Piazza San Gaetano. Some fun facts: in July 1994, then American President Bill Clinton was in Naples for the G7, and apparently very much enjoyed the pizza from Di Matteo! And in 2011, Salvatore Di Matteo won the Pizza World Cup (yes, there is such a thing!), a championship competition of pizza makers that was held in Anzio.
Address: Via dei Tribunali, 94, 80138 Napoli NA, Italy
Tip: Be sure to order some Frittata di Pasta (an egg-based Italian dish similar to an omelette or crustless quiche) along with your pizza.

Click here to see the rest of the list of my recommendations and some fun facts and tips on each of the pizzerias! Sfogliatella is a triangular-shaped filled Italian pastry native to Campania. Sfogliatella means “small, thin leaf/layer”, as the texture resembles stacked leaves. There are two types:
1) Sfogliatella Riccia (curly), the traditional version made with a soft, flaky dough, similar to puff pastry filled with a mixture of ricotta, semolina, sugar, cinnamon, eggs and some candied citrus and/or other fruit.
2) Sfogliatella Frolla, the frolla uses pasta frolla (shortbread crust) instead of the flaky sfoglia crust.  The filling is the same; a mixture of semolina, ricotta, eggs, sugar, candied citrus and cinnamon. Frittata is an egg-based Italian pasta dish similar to an omelette enriched with ingredients that include spaghetti or maccheroni pasta, eggs, bacon, and mozzarella cheese. The pasta is deep fried in a pan until it becomes an extra large omelette! It is eaten at home, on the streets and during the summers on the beach.

Babà is a yeast-leavened sweet cake soaked in alcohol (usually rum or limoncello) and shaped to resemble Mount Vesuvius (a volcano located in the Gulf of Naples in Campania), although it looks more like a mushroom! There are a few variations of Babà, you can have it plain, filled with fruit and/or with whipped cream.  Generally, it is eaten at breakfast or after the dinner as dessert over some coffee. It is a tradition to bring a tray of baba when you are invited to someone’s home. Fun Fact: if someone says to you “si nu’ babbà” (you are a baba), they’re giving you a very sweet compliment! Pizza Fritta is a Neapolitan street food that is considered a delicious speciality that is enjoyed by many Neapolitan locals.  It is essentially fried pizza and made by sealing the toppings between two layers of pizza dough and deep-fried until crispy.

6. Espresso (& the tradition of suspended coffee) The Neapolitan’s sure know how to brew the perfect cup of espresso and the coffee culture experience is unlike any other!  For Neapolitans, coffee is such an important part of their social life and a desired form of leisure. It is a way for people to come together to truly enjoy the company of each other to converse and take a break from everyday life.  An old coffee tradition was started after the Second World War (during a time when Italy suffered its longest post-war recession) called “suspended coffee” (café sospeso), which describes a generous act made by one stranger to another. You pay for two coffees: one for yourself and one for a complete stranger who comes after you (usually for someone less fortunate who may come into a shop and ask if there was a was a “caffè sospeso”). This was a way to show kindness and some empathy towards strangers who may not have been able to afford coffee during those difficult times. This tradition has since continued to this day and has even spread to other areas around Europe as well. Gelato is Italian-style ice cream. Gelato has less fat, churned with less air during the freezing process, and served at warmer temperatures than ice cream. It has a less creamy and more milky and bolder taste. Limoncello is an Italian lemon-flavoured liqueur most famously produced in Sorrento, the Amalfi coast, and the island of Capri; but is still very popular throughout all parts of Italy including Naples. Limoncello is made from lemon zest, water, alcohol, and sugar.

Where to find the best limoncello:
•  You can find limoncello in any restaurant all throughout Italy, in grocery stores and shops along the streets! 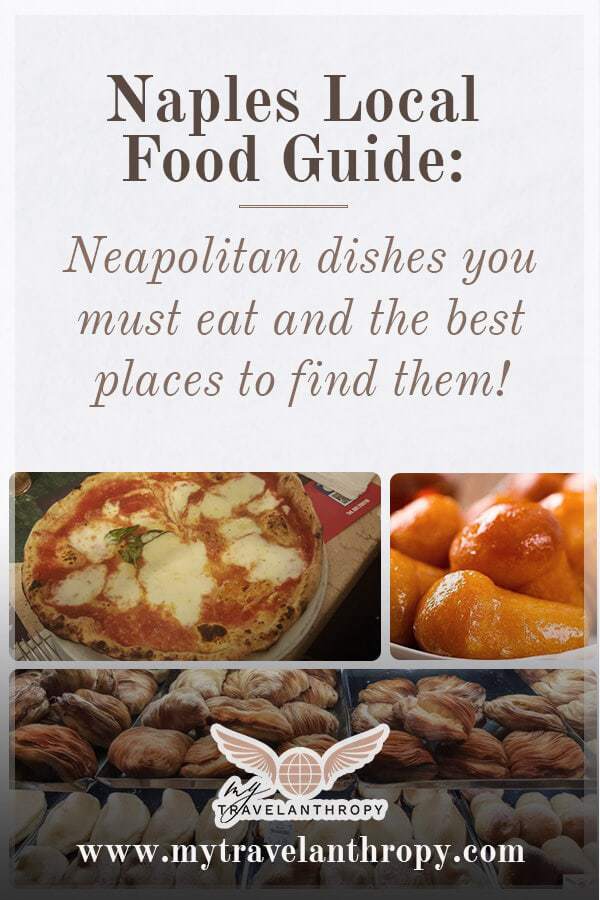 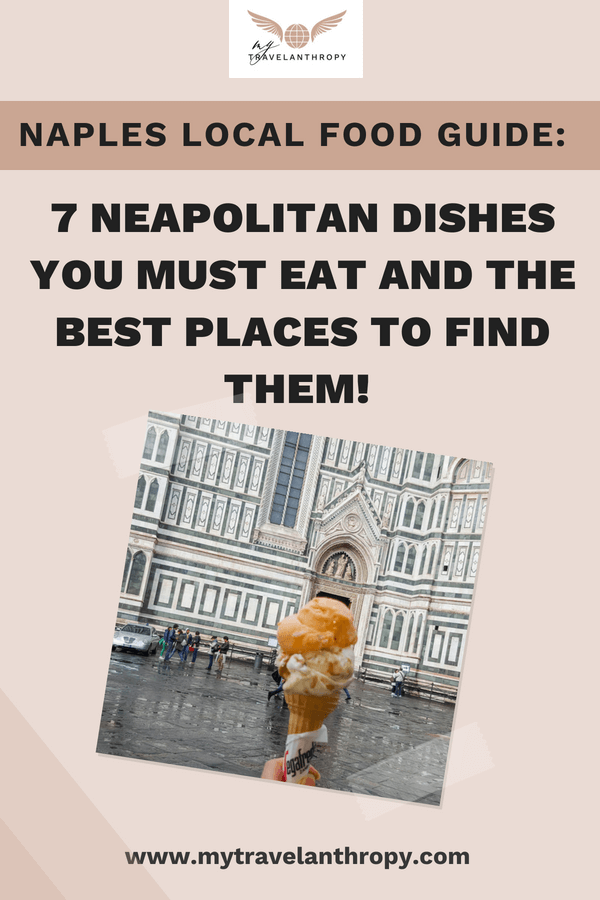 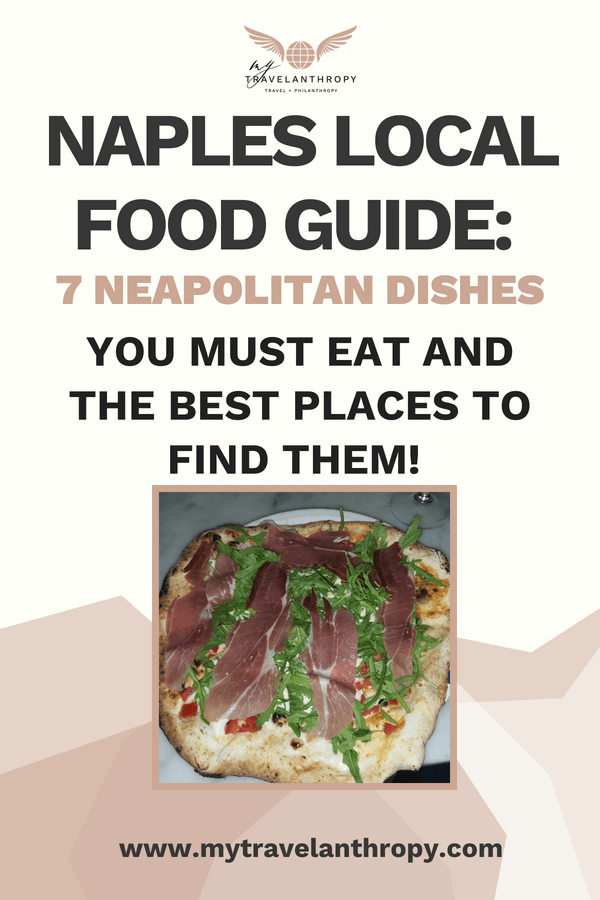 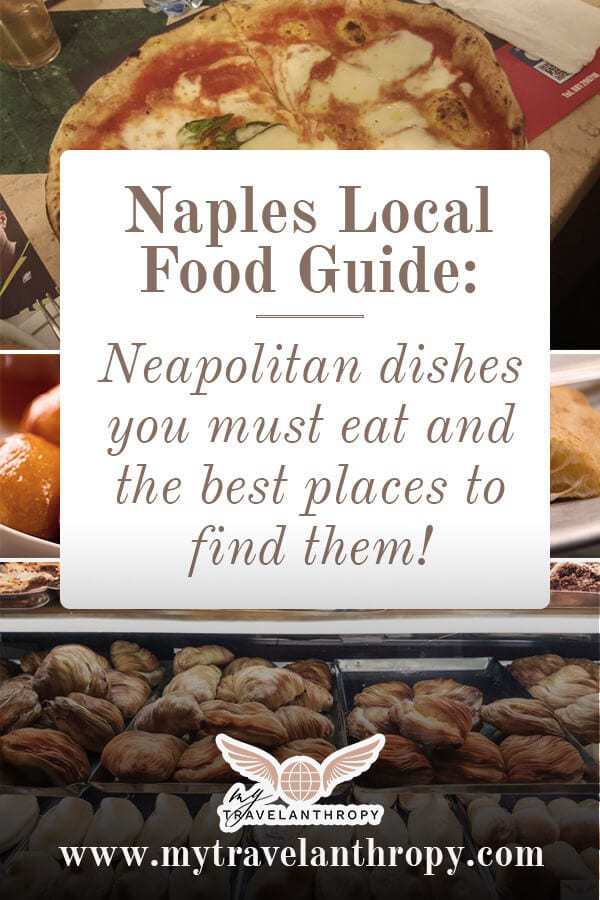 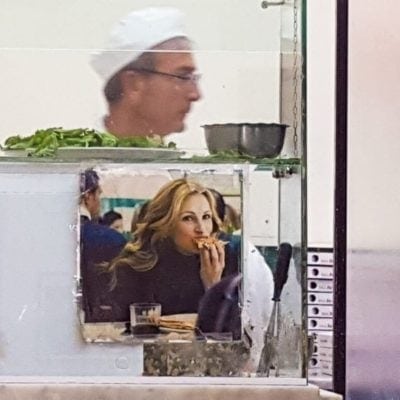 THE BEST PIZZA IN THE WORLD: TOP 5 PLACES IN NAPLES, ITALY 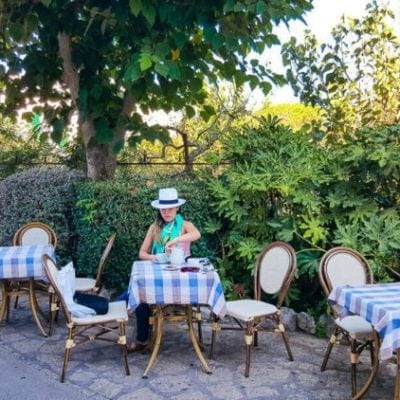 TABLE FOR ONE: 9 TIPS FOR EATING OUT ALONE FROM A SOLO TRAVELLER

​Get FREE instant access to my library of travel & volunteer resources for subscribers only! Includes research reports, interviews, worksheets, checklists, and more.